We've released our #WeWantOurBallBack T-Shirts, inspired by those worn by Leeds United on Monday night, and by the hashtag used by football fans on social media to express their opinions regarding proposed plans for a European Super League.

Over the last few days, plans have been unveiled by a number of top European clubs to break away from existing competitions and form their own European Super League, in a move that has been widely condemned by the football community, sparking the #WeWantOurBallBack hashtag on social media. Fans are concerned about the closed loop to the competition, with no relegation from or promotion to the ESL, as well as the impact the vast amounts of money on offer to participating clubs will have on the domestic game.

Inspired by the T-Shirts worn by Leeds United ahead of their Premier League game against Liverpool on Monday night, we have created our own #WeWantOutBallBack T-Shirt, which is available to order online now.

We want to use this campaign to give something back to our local football community.

In support of the remaining 14 Premier League clubs who have not signed up to the European Super League, Captain Cyan will donate 14% from each #WeWantOutBallBack shirt sale to local grassroots football projects, clubs and organisations across South London. If you have any suggestions for projects or clubs who may benefit, please let us know when placing your order. 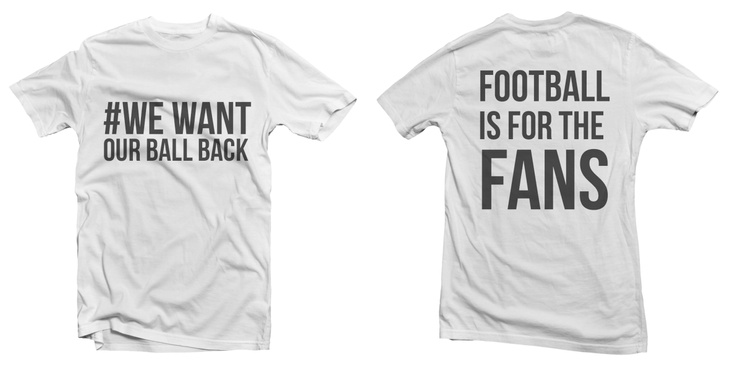 Our #WeWantOurBallBack T-Shirts are available to order online and are priced at £14.95 singularly, or £11.95 per shirt for bulk orders of 14+.

Shirts are available in both mens and womens sizes from S-XL and are hand-finished in our workshop, using dye-sublimation inks to provide a fantastic print quality.

Shirts will be printed and dispatched via our Standard Delivery service with Royal Mail within 48-72 hours of ordering.